Even before Tesla announced it will build a giga-factory in Storey County, creating as many as 6,500 direct jobs and possibly 16,000 indirect jobs (according to a report by the Governor’s Office for Economic Development), Washoe County’s real estate market was showing signs of recovery.  One of the biggest indicators of growth in the real estate market is the number and valuation of building permits in the area.  Building permits are required to construct new buildings and to make certain improvements to existing properties.

These permits are issued by local governments prior to construction and are a good leading indicator of actual construction to take place in the future.  Washoe County’s growth in building permits since the recession is a good sign of the region’s economic recovery.

Building permits increased by 156% between 2010 and 2013 (the last full year for which data is available), from 477 to 1,221 permits.  Building permit data for 2014 is available through September only; using historical growth in permits between October and December, we estimate approximately 1,450 building permits will be issued in 2014.  This is a 19% increase over 2013.  Building permit valuation followed a similar trend to the number of issued permits.  While the 1,450 permits expected for 2014 is much lower than the peak of 5,535 in 2005 or even the years prior to the real estate boom, four years of growth since 2010 indicate a positive trend for this real estate market component.

While the single family market saw a strong positive growth trend through 2005, followed by a steep decline through 2010, and some recovery to date, the multi-family’s market’s path was a little more varied.  This is due to the less consistent nature of the multi-family market, where large projects in some years can shift trends significantly.  While the number of single family permits grew, multi-family permits dipped in 2003, before reaching the peak of 146 permits in 2004.  Building permit valuation did not peak until 2006 with a value of $103.3 million.

Like the single family market, building permits for multi-family units declined through the recession, though the bottom of the market was not reached until 2011 with only two permits issued in that year.  This was an almost 99% decrease in the number of permits issued over 2004. 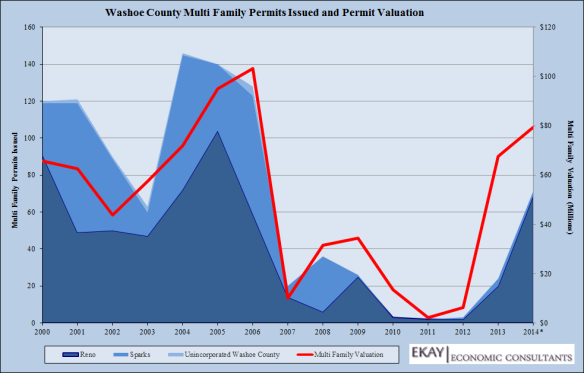 As with the multi-family market, large commercial projects in certain years can skew the market trend, making growth and decline trends less smooth.  However, overall, a trend similar to single family and multi-family markets is shown by the commercial market.  The number of commercial permits issued peaked in 2006 with a total of 457 permits with a value of $509.2 million.  Commercial permits did not hit bottom until 2010 when 99 permits were issued with a value of $53.4 million, a 78% decline in the number of permits over 2006.  Permit valuation decreased further in 2012 to $44.7 million, though a higher number of permits (140) were issued in that year.

Overall, the steady growth in building permits and permit valuation in all three components of the real estate market show the increasing confidence by builders in the recovering economy and the increases in demand for new construction from residential and commercial buyers and lessees.  The growth in the number of building permits can be seen in the remainder of the real estate market.  Construction employment in Washoe County increased by 16% between 2011 and 2014 (1st Quarter) from 8,697 to 10,125.[2]  Median single family home prices also increased from $145,000 in the 1st Quarter 2012 (lowest price through recession) to $248,000 in 3rd Quarter 2014, an increase of 71%.[3]  While it is unlikely pre-recession, boom, construction levels will be reached in the near future, the market is recovering steadily, to the benefit of the region’s economy.

[1] All building permit data in this blog from City of Reno, City of Sparks, and Washoe County websites.